Computer monitors are getting better every year, but it is sometimes difficult to understand which ones are best for you. 1080p monitors are a strong choice for many people because their resolution is good enough to show nearly all content in excellent quality without straining the GPU. They also have an easier time maxing out a 144Hz refresh rate, which is important for accurate updating of the graphics.

Higher resolutions place significantly more demands on the graphics card. That can lead to slowdown or tearing when compared to running the same content with the same settings on a 1080p monitor. In addition, a significant amount of content tops out at a 1080p native resolution, so anything above that would simply be upscaled. Until more Quad HD and 4K content comes out, 1080p will continue to be the ideal middle ground.

The role of budget matters too. 1080p monitors sell at a steep discount compared to higher resolutions because they are no longer the cutting edge. That money can then go into top-quality speakers, computer components, inputs, or anything else.

In this post, we will review a variety of 1080p monitors for features, value, and quality.

The U2417H from Dell is one step up in quality as well as price. For approximately the same feature set in terms of ports and cabling, you get a better panel, superior contrast, and other upsides. The Dell costs about $75 more than the LG, which still places it in the affordable range of the spectrum.

The Dell has a few design improvements as well. For example, the bezel is thin and unobtrusive. The stand is balanced, strong, and simple, so it will handle some bumps and motion without getting in the way. It also has a large hole in the center of the column where you can thread cables so they can drop down behind your desk.

The panel on the Dell U2417H is IPS, which is the better tech over the cheaper TN format. IPS enables a wider color range, better contrast, and deeper blacks. These characteristics are important when you can’t rely on resolution alone to make a statement. The U2’s display characteristics are excellent for the price. Perhaps the single biggest downside is that the monitor is only a 24-inch model, but this is as much a question of your available space as it is about viewing angles or immersion. 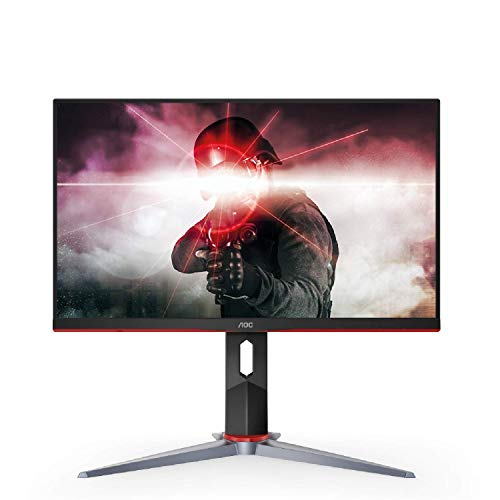 With the three-year warranty that comes with this gaming monitor, you can exchange it if you experience any dead pixels. That warranty also covers any accidents that damage the monitor within the first year. You’ll like the 1080P display that gives it a strong resolution and the one millisecond response time. Designed for gamers, the monitor features a 144Hz refresh rate as well as a frameless design on three sides. A built-in feature adapts the brightness levels based on the surrounding light, while another helps you stay in your games and compete against others. Gamers also like that the included stand lets them change the height of the monitor to work for them.

LG’s second entry on this list is the 24GM79G-B. It’s a gaming monitor that can reach 144Hz and also comes with FreeSync to help it accommodate AMD chipsets. Among 1080p monitors, it is one of the best available. The stand is fully adjustable for convenience, it has just 1ms of lag, it comes with a Black Stabilizer for better black/color contrast, and it has an onscreen control module.

The 24GM79G-B uses a TN panel, which is usually not optimal, but the Stabilizer makes the output comparable to the normally superior IPS type. Additionally, there are multiple pre-made control settings for different types of gaming that you can quickly swap through if you do not want to go through the trouble of setting the monitor up yourself.

Like many other 1080p monitors, the LG is 24 inches in size. The adjustable stand makes it feel larger because you can adjust the angle so that it suits your desk and chair position. That goes a long way towards helping you get the most for your money. Speaking of money, the 24GM is not that much more expensive than the other models so far on this list thanks to the generally low prices of 1080p monitors.

Like the previous entry, the AOC monitor was designed with gamers in mind. It has a 144Hz refresh rate. There is no FreeSync for AMD users or G-Sync for Nvidia users, and that is a big part of why the AOC model has a lower price than the LG. In terms of convenience, the stand is very adjustable and the unit itself has 4 USB 2.0 ports for connecting input sources.

As with other gaming monitors, the AOC has 1ms of input lag. You can also expect a very good contrast ratio across colors. There is no specific black-supporting technology like the Stabilizer, but the black balance is still strong. You can use the included stand or opt for a wall-mounted approach depending on your space and preferences.

The AOC has seven different modes that each use their own aspect ratio. You can switch between them on the fly if you game in several different genres and want to adjust the display to match each one. It’s a useful feature for some users and if you never need it, you will not have to deal with it cluttering the settings.

The Acer GN246HL is back down at the budget end of the spectrum. It is yet another gaming-focused design with 144Hz of refresh ratio and an input lag of 1ms, both important standards in the gaming world. The Acer is a little short on features. For example, there are no USB ports of any kind on this model. That is a downside if you plan to hook into multiple sources. In addition to that, there is not much ability to change the tilt of the screen. That means you need to already have a spot marked out for the monitor.

In terms of black and color display, the Acer does very well. The stand has an X pattern in the base, which still takes up roughly as much space as a typical square or rectangle design. It might be a good idea to place a weight on top of the base if you happen to have a lot of items on your desk.

The Acer will cost you less than $200 depending on the source. So that puts it firmly in the budget category. Again, observe how small the price differences are in the 1080p models and makes.

The Asus is the most expensive model here by far. It will be hard to find for less than $550. That is far above the cheapest models on this list. The big draw of the Swift, in addition to its many USB 3.0 ports and other conveniences, is the monster refresh rate that it can get: 240Hz, which is almost double what is normally considered the top end rate of 140Hz. You will need a graphics card with some serious power to achieve this rate and it is much, much harder on larger resolutions. If you have the gear to support it, there is nothing else quite like 240Hz gaming. You will notice it more on faster-paced games, but it will be clear on just about any application.

In other news, the Swift has a great set of ports and comes with Nvidia’s G-Sync. That’s a big reason to pair this with an Nvidia graphics card, because even if you don’t get to 240Hz you can get as close as you can.

The Swift costs so much more because it can do so much more. 240Hz is far beyond what most monitors can manage. If you have the money and the gear, then you could do a lot worse than the Swift. Its ports and design future-proof the monitor to an extent, helping it stay useful for longer.

The final word on 1080p monitors is that there is no objective best model. Each ones has its own combination of characteristics and price. Make sure you know what exactly you want and how much you are willing to spend. Once you establish that, then you can move on to narrowing down the list of monitors to the best one for you. Even though most of the new development is in Quad HD and 4K monitors, there are still plenty of excellent new 1080p monitors on the market.